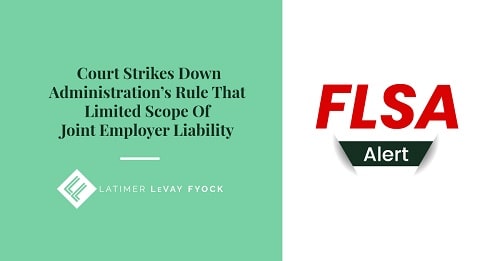 In a victory for workers and a setback for employers and the current administration, a federal court recently struck down the final “joint employer” rule issued by the U.S. Department of Labor (DOL) in January 2020. That rule dramatically limited the number of scenarios in which companies could be found equally responsible for an employee’s wages and overtime pay under the Fair Labor Standards Act (FLSA).

The September 8, 2020 decision from the U.S. District Court for the Southern District of New York found that the rule was “arbitrary and capricious” because the DOL “failed to adequately justify its departure from its prior interpretations of the rule and to account for some of the Final Rule’s important costs.”

At issue in the Final Rule and the court’s decision in State of New York v. Scalia was the scope of an employer’s liability for failing to pay minimum wage or overtime pay in situations where an employee had one or more “joint employers.” Under the FSLA, an employee may have one or more joint employers, defined as any employer that is jointly and severally liable with another employer for the employee’s FLSA-mandated wages and overtime pay.

The rule purported to provide “updated guidance for determining joint employer status when an employee performs work for his or her employer that simultaneously benefits another individual or entity,” such as is the case in franchisor-franchisee relationships. Issues of joint employer liability also frequently arise with subcontractors, temporary staffing firms, and other businesses that outsource or contract workers for services.

The Final Rule established a four-part test for determining joint employer status. Specifically, an employer could only be considered a joint employer if it “actually exercises” the power to:

The rule was intended to reverse Obama administration policies that would have broadened joint employer liability.

But in his 62-page ruling, U.S. District Judge Gregory Woods found that the DOL improperly narrowed the definition of “employer” contrary to the language and intent of the FSLA. He concluded that the FLSA established an expansive system for examining employees’ relationships with employers, and that the four-point test inappropriately narrowed that system. Specifically, Woods held that the rule’s requirement that an entity actually exercise control over a worker to be deemed a joint employer conflicts with the FLSA, and that control is merely one factor courts and the DOL should continue to review in making their determinations.

Judge Woods also rejected as “silly” the DOL’s argument that the new rule would not negatively impact workers since they would retain their right to recoup lost wages from their primary employer.

Because the current administration ignored studies and other evidence that the new rule could cost workers $1 billion in lost wages each year and did not do their own analysis, it simply based its rule on the assumption that it “would cost workers nothing ― an obviously unreasonable assumption.” Accordingly, the rule was “arbitrary and capricious” and thus untenable under the federal Administrative Procedure Act.

What The Ruling Means For Employers

Employers with joint employment relationships should thus act, at least for now, as they did prior to the March effective date of the rule.

If you have questions or concerns about joint employer liability or the recent decision striking down the DOLs Final Rule, please contact one of the attorneys in Latimer LeVay Fyock’s Labor and Employment Practice Group.