Abandonment of Status: How Time Abroad – Even During the Pandemic – And Other Acts Can Put Green Card Holders At Risk 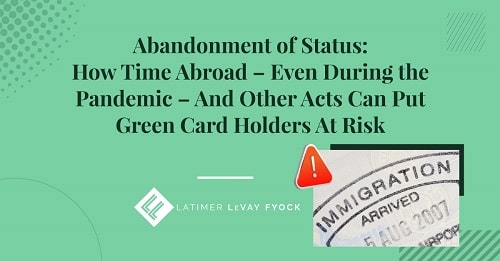 For many immigrants to the U.S., obtaining a coveted green card can feel like reaching the finish line after a long and challenging race. While full citizenship may remain a goal, becoming a lawful permanent resident means that a life can be built in this country with a sense of security, clarity, and continuity.

Acquiring a green card differs from a race, however, in one critical respect. While you can’t lose a race after crossing the finish line, you can quickly and unintentionally lose your permanent resident status if immigration officials conclude you have abandoned that status.

What is Abandonment of Status?

One of the first lessons that any green card holder should learn is that there is nothing at all “permanent” about being a permanent resident. There are many reasons U.S. Citizenship and Immigration Services (USCIS) can revoke lawful permanent resident status, such as the commission of certain crimes or marriage fraud.

However, for many green card holders, it is the ties that bind them to their countries of origin that too often become their unraveling. And as the world (tentatively) opens back up for international travel, permanent residents can put their green cards at risk if they travel abroad too often or for too long, if return trips are too few or too short, or they take other acts that call into question their intent to make the U.S. their permanent home.

Disruptions to and restrictions on travel due to the COVID-19 pandemic have made it difficult for many green card holders to return to the U.S. or kept them abroad longer than they had planned. Immigration authorities have not issued any blanket policy or statement as to how they will treat returning permanent residents whose absence from the country has been caused in whole or in part by pandemic-related issues. However, if you are a green card holder, you need to remain cognizant of acts that can raise USCIS eyebrows and ultimately turn into a declaration that you have abandoned your permanent resident status, can no longer avail yourself of the rights that come with it, and even face the possibility of removal proceedings.

What Is Considered Abandonment?

The determination as to whether a green card holder has abandoned their status focuses largely on the immigrant’s intent as evidenced by their conduct. While “permanent” may be a misnomer for green card holders, “resident” is not. You must actually make and keep the U.S. your home to maintain your status as a permanent resident.

Immigration officials may conclude that you have abandoned your lawful permanent resident status if you:

How Long Is Too Long?

Travel abroad is the most common reason permanent residents find themselves scrutinized for possible abandonment of status. Green card holders are free to travel outside the U.S, and short or temporary trips will usually not raise any USCIS suspicions. The problem develops when those trips become lengthy or frequent, especially when return trips to the U.S. are for brief periods.

If no other factors are involved, trips of six months or less should not be problematic, while absence from the U.S. for over a year will almost always raise the alarm and create a presumption that you abandoned your status. But even trips of less than a year can be a basis for abandonment when accompanied by other facts which may indicate that you do not consider or act like the U.S. is your home.

Other Factors Looked At in Determining Abandonment of Status

When attempting to reenter the U.S. after a lengthy absence, Customs and Border Protection (CBP) officers will try to determine whether you have abandoned your status by looking at several indicators of intent, such as whether you:

How to Play It Safe With Your Permanent Resident Status

While immigration officials will evaluate each permanent resident’s situation individually in determining whether they have abandoned their status, here are some general tips that can help minimize your risk, especially if you leave the country on a regular basis:

If, upon returning to a U.S. port of entry, CBP makes the preliminary determination that you abandoned your permanent resident status, you still have rights. CBP may urge you to sign a Form I-407, but cannot force you to do so. Whether you sign the form or not, you are still entitled to a hearing before an immigration judge to determine whether or not you have abandoned your status. The CBP can’t decide the issue on its own.

As noted, the pandemic may impact authorities’ analysis of extended absences from the country, but it is far from clear that it will be a cure-all for permanent residents who may have otherwise put their status at risk.

If you have questions or concerns about abandonment of status generally or how the COVID-19 pandemic may impact your situation, please contact one of the experienced immigration lawyers at Latimer LeVay Fyock today.