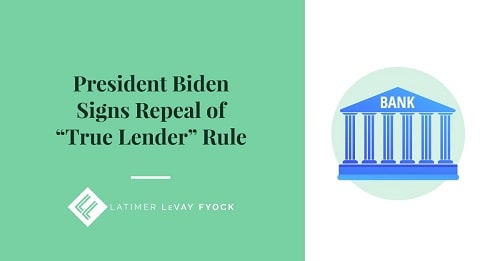 The “true lender” rule, which made it easier for banks to sell loans to third parties such as fintech firms and non-bank lenders, is no more. On June 30, 2021, President Biden signed a joint resolution of disapproval passed by the House of Representatives and the Senate under the Congressional Review Act (CRA) to repeal the rule that the Office of the Comptroller of the Currency (OCC) had established under the previous administration.

The CRA allows Congress to review promulgated agency rules and regulations and disapprove of such regulations through a joint resolution of Congress. The president’s signature on the resolution nullifies the rule and prohibits the issuing agency from issuing or adopting the rule again “in substantially the same form.”

The OCC promulgated the true lender rule in October 2020 in an effort to provide clarity for national banks who entered into partnerships with non-bank third parties, including financial technology companies. Defining which party was the “true lender” was important for determining whether such loans would implicate specific state laws and regulations regarding allowable interest rates.

Under the rule, a national bank would be considered the true lender if, as of the loan origination date, it:

Support for and opposition to the rule fell on predictable sides. Financial industry groups, Republicans generally, and the previous administration argued that the rule would facilitate the availability of affordable credit to underserved communities by eliminating “increasingly legal uncertainty regarding such relationships” that “discourage banks and third-parties from partnering,” as the OCC put it.

Conversely, consumer advocates, state regulators, and most Democrats opposed the rule on the grounds that it would allow predatory lenders to avoid state interest rate limits on loans and other consumer protection rules and encourage them to prey on vulnerable consumers. That opposition evolved into a federal lawsuit filed by the attorneys general of multiple states challenging the rule's validity. That suit is now, obviously, moot.

A Return to Uncertainty

With the repeal of the true lender rule, determining which party is the true lender in a transaction will once again be a case-by-case evaluation. This uncertainty in the absence of a consistent nationwide rule may create compliance headaches and lead to disputes about the right of loan purchasers as assignees to collect originally agreed-upon interest rates, among other issues.

If you have questions or concerns about the repeal of the true lender rule, please contact one of the attorneys in Latimer LeVay Fyock’s Banking, Finance, and Creditors’ Rights Practice Group today to arrange for a consultation.