Peloton and The Dangers of Spinning Into "Genericide" 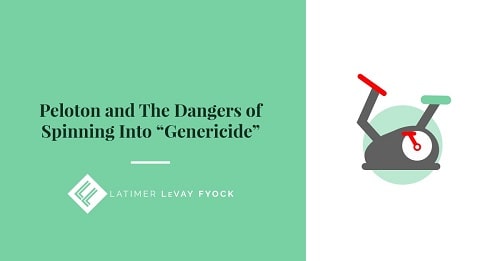 "Cancel culture" may or may not be an actual thing, but canceling trademarks certainly is. Every year, the U.S. Patent and Trademark Office (USPTO) cancels thousands of trademark registrations for a variety of reasons. Most often, it is because the trademark holder has abandoned the mark, meaning it has not used it in commerce or filed the appropriate paperwork attesting to that use in the years after initial registration.

When a Mark Becomes A Victim Of Its Own Success

Sometimes, however, it is a mark’s ubiquitous use, not its non-use, that can put it in danger of cancellation. And the folks at Peloton, the wildly popular and interactive stationary bike/fitness-instructor-yelling-at-you-on-a-screen company, believes that “spinning” and “spin classes” fit the bill.

Specifically, Peloton filed a petition with the USPTO in February of this year, seeking cancellation of the registered trademarks SPIN and SPINNING, both of which have been held by Venice, California company Mad Dogg Athletics since the 1990s. Peloton claims that both marks should be canceled because “spin class and spin bike are part of the fitness lexicon” and that they are “generic terms to describe a type of exercise bike and associated in-studio class.”

If you have ever ridden on an escalator not manufactured by Otis, taken an aspirin that Bayer did not make, or slept in a murphy bed that did not come from the Murphy Bed Company, then you understand the concept of “generic” in the context of trademarks. Those are all terms that were once trademarks but are no longer. When a trademark holder loses its rights to the mark because it becomes associated with a class of goods or services rather than the source, it is often called “genericide.”

As defined by the USPTO, “generic terms are terms that the relevant purchasing public understands primarily as the common or class name for the goods or services” as opposed to a specific manufacturer, company, or brand. Generic terms cannot receive trademark registration because they are “incapable of denoting a unique source” and “are the antithesis of trademarks.”

When Mad Dogg registered its “spin” and “spinning” marks, those terms were not commonly associated with a general type of fitness activity or class. Now, Peloton argues, this is precisely how they are used and why the USPTO should cancel the marks on the basis of genericness. Unsurprisingly, Mad Dogg strenuously disagrees, stating on its website that “these marks are brand names that serve to identify the unique fitness products and programs offered by Mad Dogg Athletics, Inc.,” and that they are “important business assets” that should be treated with “care and respect.”

What Makes a Mark “Generic”?

As noted, a mark is generic if “its primary significance to the relevant public is the class or category of goods or services on or in connection with which it is used.”  The USPTO uses a two-part test when evaluating whether a mark fits that definition and is therefore subject to cancellation:

To understand the connection between the two parts of the test, think of apples. If an orchard owner tried to register “Apple” as a mark applied to the tasty, crunchy fruit they grow, they would be laughed out of the USPTO. That is because the word apple is a generic term for the fruit we call an apple. But “Apple” was not (and still is not) a generic term for a computer. That is why Steve Jobs could register the term and the orchard owner could not.

How To Avoid Genericide

Genericide does not happen suddenly. It is a result of years or decades of use and association by consumers. But it is the very success of a mark that can put it in danger of becoming generic if the mark’s owner is not vigilant and assertive about maintaining the connection between itself and the mark.

The key is to educate the public that your mark is the source of the product and not the product itself.  Use the ® or ™ symbol and consistently use the brand name along with the general name such as “Kleenex-brand tissue.” That’s what Kimberly-Clark has done, which is why “Kleenex” remains a registered trademark even though most of us use that term to refer to any facial tissue.

If you have questions about genericness or any other trademark matters, please contact John Ambrogi or Colin T.J. O’Brien, Co-Chairs of Latimer LeVay Fyock’s Intellectual Property Group.