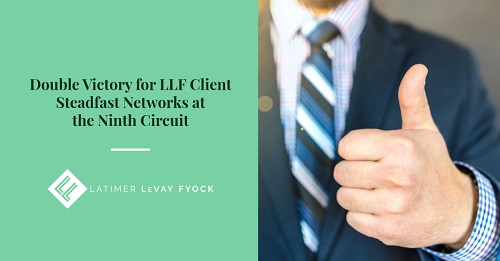 The primary issue in the appeal was whether Steadfast had taken “simple measures” to avoid copyright infringement when it forwarded notices of infringement to a hosted website and every alleged infringe material was taken down.

ALS complains that it is not enough to forward the infringement notices to [hosted website’s] owner in light of the number of infringement that Steadfast has received. But the number of notices is legally irrelevant.  To be liable for contributory copyright infringement, the knowledge required is “more than a generalized knowledge by Carriers of the possibility of infringement” because “contributory liability [does] no automatically follow where the ‘system allows for the exchange of copyrighted material.’” Luvdarts, LLC v. AT & T Mobility, LLC, 710 F. 3d 1068, 1072 (9th Cir. 2013)(quoting A&M Records, Inc v. Nanpster, Inc.239 F.3d 1004, 1021 (9th Cir. 2001)).

The number of notices that Steadfast previously received gives at most a general knowledge that infringement ill likely occur again in the future; this does not give notice of any specific acts of infringement that are actually occurring.

The court found that Steadfast’s appropriate simple measure of forwarding the infringing notices was sufficient given the circumstances because each and every infringing work was taken down.  Further, the court ruled:

The court also ruled that ALS did not pursue other options which may have ameliorated its claimed “whack-a-mole” problems such as taking action against the owner of the hosted website or the actual individuals uploading the authorized images.

The ruling by the Ninth Circuit confirms that Steadfast  followed the letter and spirit of the law.

John L. Ambrogi and Colin T.J. O’Brien, the co-chairs of Latimer LeVay Fyock’s of Intellectual Property Group, represented Steadfast Networks in this action.  They can be reached at jambrogi@llflegal.com and cobrien@llflegal.com.

A copy of the decision can be found here.